As I was finalizing this issue of Big Podcast Insider, I got a message that Lisa Marie Presley had died.

I didn't know her, but we did spend a couple of hours together to do an episode of Music Business Radio.

She was very sweet, and I don't want to take away from that, but the thing I remember most about my interview with her was that it was the only interview I've ever done (out of hundreds) where I agreed not to ask about certain topics.

Skipping Michael Jackson questions was easy. I love his music, but felt the marriage story was more about "celebrity gossip" than anything of substance.

The other was somewhat newsworthy, but since it could negatively affect her personal life, I didn't want to get involved. She was doing everything right, in my opinion, and I wanted to assist that, or at least stay neutral, not hinder it.

In general, I believe in asking the questions your listeners want to know, but I think it's also important that we keep in mind that our guests are real people, not nameless, faceless "celebrities" or pawns in our desire for downloads or ratings.

I missed Kenny Rogers, thinking I'd be able to get to him later. I've missed a few people ... because there's no "later" once somebody is gone.

It's not just celebrities or other "guests" that we can miss out on. Maybe it's sitting down with your mother to get her story. Or talking with your next door neighbor, who has lived in your neighborhood for 50 years, about the history of the street you live on.

Regardless of who it is, get the tape now. You will regret it if you don't.

I'll have more thoughts in the audio edition of this issue coming soon ... make sure you don't miss it.

Missinglettr is an all-in-one promotion platform that turns podcasts into engaging social media posts and helps you solve distribution by finding the best influencers in your niche.

So many people get caught up in the "big numbers" of social media and podcasting, forgetting that sometimes the biggest impact you can have is when you do something for a single person.

This is a feelgood story that shows what can happen when you put a message out to the world.

"Impact" doesn't have to be flashy.

Is "Personal Blogging" the Next Big Thing?

In the beginning, there were blogs, and they were the original social web. We built community. We found our people. We wrote personally. We wrote frequently. We self-policed, and we linked to each other so that newbies could discover new and good blogs.

I want to go back there.

I feel like we're watching this happen right now. It's not just "all in your mind" that podcasters are moving away from social media, going back to "old school" options to connect like blogs and mailing lists, and moving their communities to private platforms.

Here is why this should and is happening:

The biggest reason personal blogs need to make a comeback is a simple one: we should all be in control of our own platforms.

As podcasters, we're already one step ahead of the game, at least if you're in control of your RSS feed.

But there is always a "next step" of ownership and you should consider this when you build anything online this year. Yeah, YouTube and TikTok are hot, but anything you do there is on rented land and may not be there tomorrow.

If nothing else, anything you promote and link online should be done via your own domain using a custom linking service like Switchy. This will allow you to easily change links over should a site go down or you lose your username because your account is hacked.

If you're like me, and you love finding out how things work, you'll love this story about growing a newsletter to almost 60,000 subscribers in only 32 months.

But there's a second reason I mention it ...

Yeah, what he's doing will give you some great ideas for growing your podcast subscribers, but pay attention to the subject of his newsletter, because that's where the "secret sauce" is.

Look, you can do all the "tricks" in the world when it comes to growing your podcast, but if you don't start with the great foundation of a topic that people are actually curious about, all the tricks in the world aren't going to help you.

So what's the "secret sauce" here? Ali figures out how startups and companies like Uber, Doordash, and Spotify got their first 1000 customers.

That would be a great idea for a podcast. And the "First 1000" techniques mentioned in Growth in Reverse have some great ideas to jumpstart this or any podcast.

Lots changed about Instagram last year. To many people, it feels more like TikTok than the photo-sharing app we all signed on for.

Get the details here.

A thought related to your podcast, that you might connect with ...

You're either innovating or following. There's nothing wrong with learning from others or waiting for them to make the first move, but you need to consider this one thing ...

What's going to make your podcast stand out?

Seriously, why would people listen to your podcast if they can get "the same podcast" elsewhere? I feel like this is happening with Instagram – we don't need "the new Instagram" because we already have TikTok.

So what's your answer? Why are people going to listen to your podcast instead of another podcast? Let me know via Twitter or Mastodon ...

Not yet on Mastodon? Here's an invite to a server just for podcasters.

The full headline is ... "TikTok Faces US Ban After Discovery that Chinese Officials had Used the App to Spy on US Journalists"

True or not, take this as a gentle reminder not to become too attached to one social media outlet or build your business on rented land.

At the very least, get your own domain name and send links to your social media via that domain. That way you won't lose any momentum should any of your "rented land" disappear – you can just change the forwarding address.

Marketing Your Podcast via Phone

You've heard this jingle probably a thousand times. But have you heard this remix? Or this one?

RELATED: If you're in the United States or Canada, call 615-488-4321 to see something I set up to get more podcast subscribers. Thsis technique is amazing if you do anything in front of a live audience, where people most likely have phones with them.

I have been using Rumble Studio for the last new months and I love it.

Rumble Studio makes it easy to record people asynchronously. You can build an "interview landing page" to ask questions and collect responses within minutes. Guests are able to record or upload audio responses to multiple-choice questions as well as submit text, images, and videos. 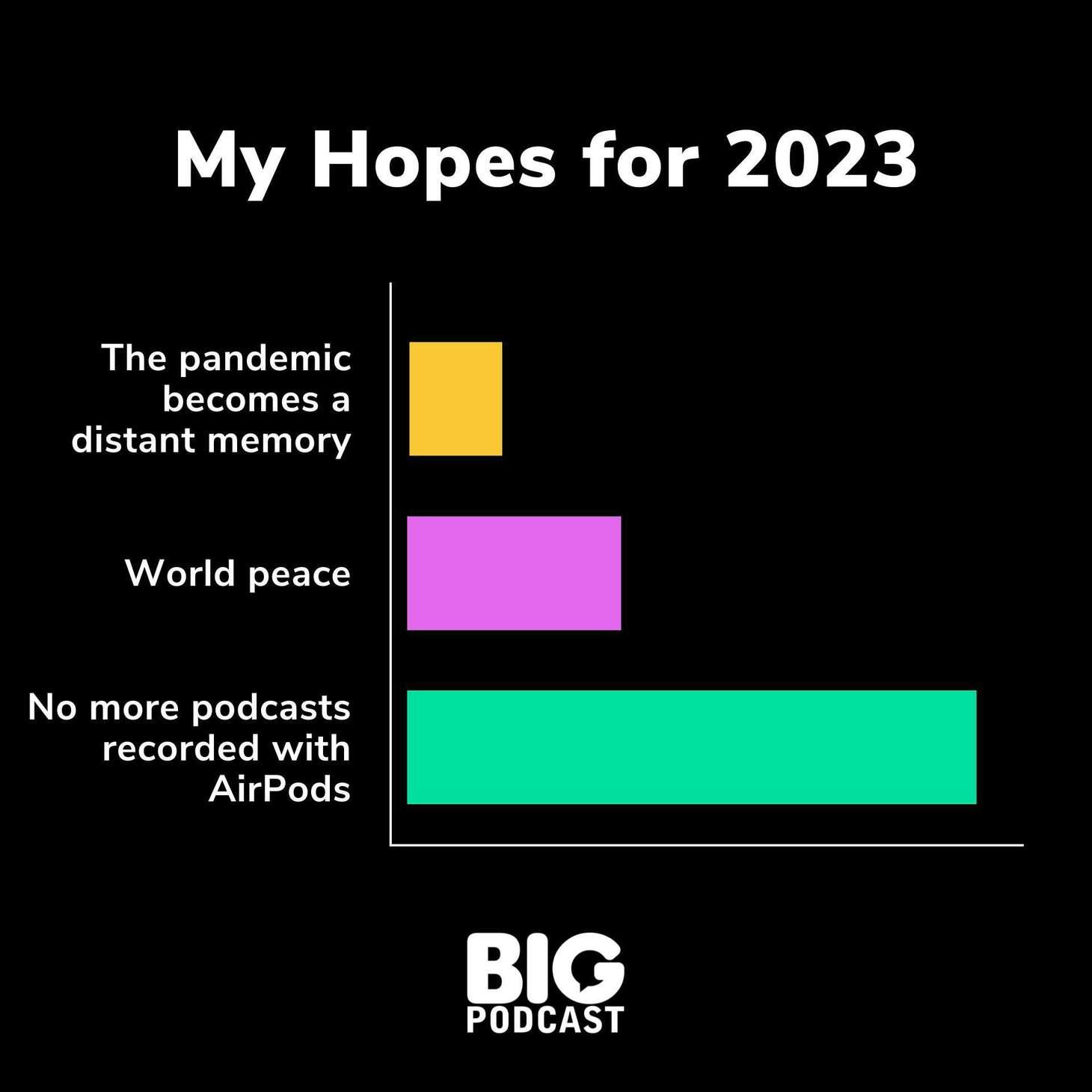 Seriously ... what's your big podcasting goal for this year?

Not yet on Mastodon? Here's an invite to a server just for podcasters.

Use Swell AI to automate your podcast episode summaries, time-stamped episode highlights, and long form articles based on the content of your episodes.

Explore thousands of high-quality songs to use in your podcast. New music added daily.

If you like the newsletter, you'll love the podcast. It's called Build a Big Podcast and it will help you do three things:

On a desktop? Scan the QR code above to make it easy on yourself!

No spam, ever. We'll never share your email address and
you can opt-out at any time with a single click.